The Election and the Stock Market

Election news is everywhere right now. You can’t get away from it—even your favorite financial advisors are writing articles about it!

Given all that can be at stake in an election, it’s understandable that people are concerned about their investments. You work hard to save money and want to do everything in your power not to lose it. Every four years, we have clients who want to take their money out of the market for the weeks on either side of the election. I’ve even heard people say (from both sides of the aisle) that they want to stay out of the investment markets for the next four years if their preferred candidate loses.

But as much as elections can signal changes in public policy and affect our lives, they often don’t have much of an impact on stock market returns—at least not in the short term. More importantly, the impact they do have is very difficult to predict. So, just like with any other event that affects the stock market, it’s very hard to tell what’s about to happen, but easy to know how to handle the long run. 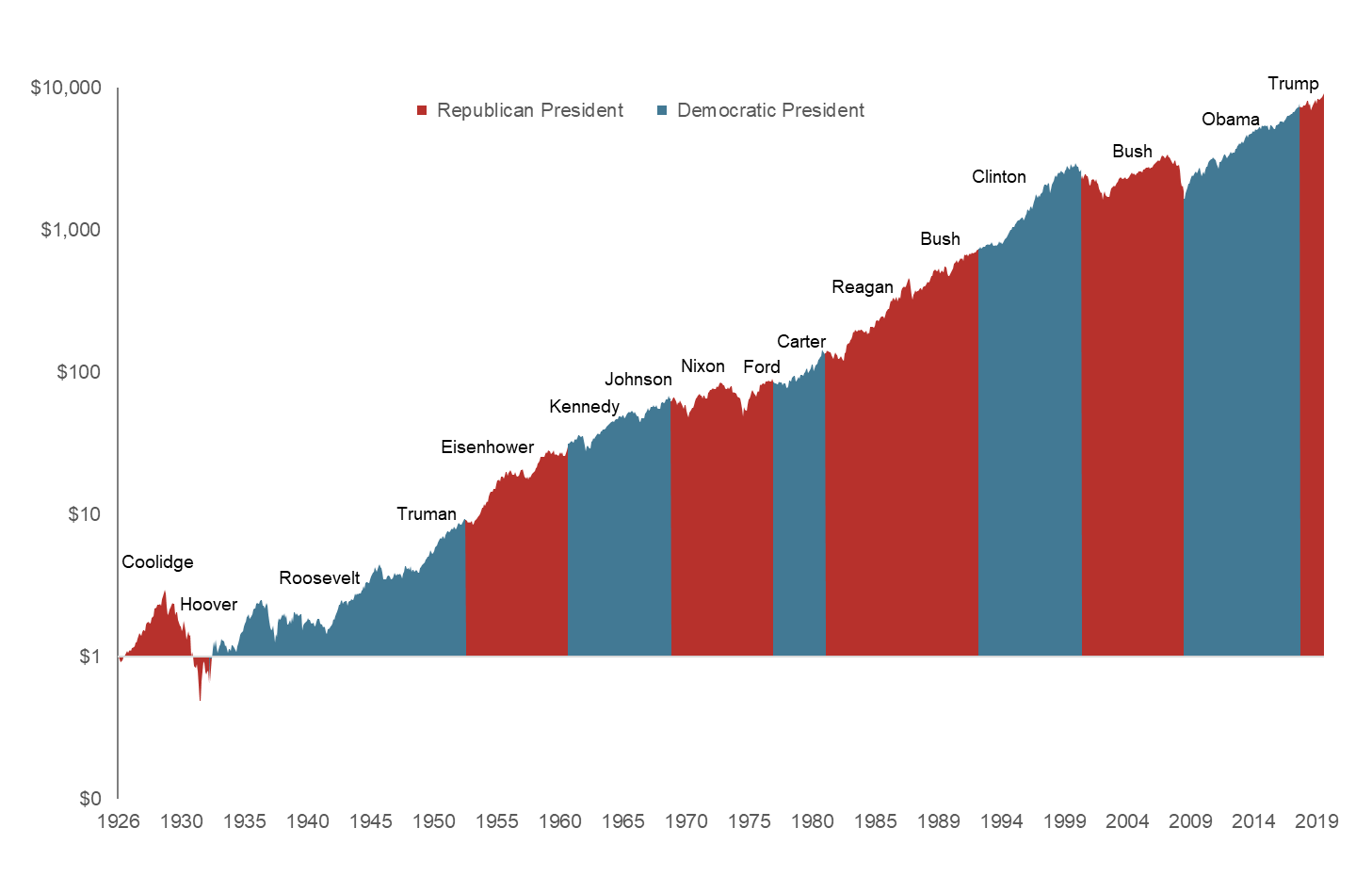 Think back to 2016. You may recall that the market did very well in the days after Donald Trump was elected President. What many people seem to have forgotten, however, is that the markets expected something vastly different to happen. We can tell this by looking at the after-hours trading between the time it became clear that Trump was headed for an upset win and the time the New York Stock Exchange opened at 9:30AM the next day.

In those hours, the international markets fell precipitously: at one point the Dow futures were down more than 900 points. The financial press frantically churned out articles about the tumble, some publishing just as the markets opened. But when they did open, the results were unexpected. The Dow’s fall was much smaller than expected (230 points), and it ended the day up by 256 points (about 1.38%).

Of course, we’re not saying the same thing will happen this time. Our point is that, even for one single day, the market reaction was very different from what was projected, and had a significant swing, but changed by less than 1.5% for the day. And this was after a major upset!

The History of Market Reaction to Elections

There are many ways to look at market statistics around the time of elections, but it’s easy to forget that reliable indices haven’t been around that long. There have only been 23 presidential elections since the start of the S&P 500 index. Statistically, this isn’t a very large sample size, and we all know the political landscape has changed in the past 92 years.

So, take any noticeable patterns with a grain of salt. Even if we could know the outcome of the election in advance, that doesn’t reliably tell us which direction the market will go.

The chart below shows market returns every month since 1926 with blue or red highlights for months directly following presidential elections. Conventional wisdom says that the markets do better immediately after electing a Republican, but as you can see, that is not universally the case. Most months following elections have positive returns regardless of who won. 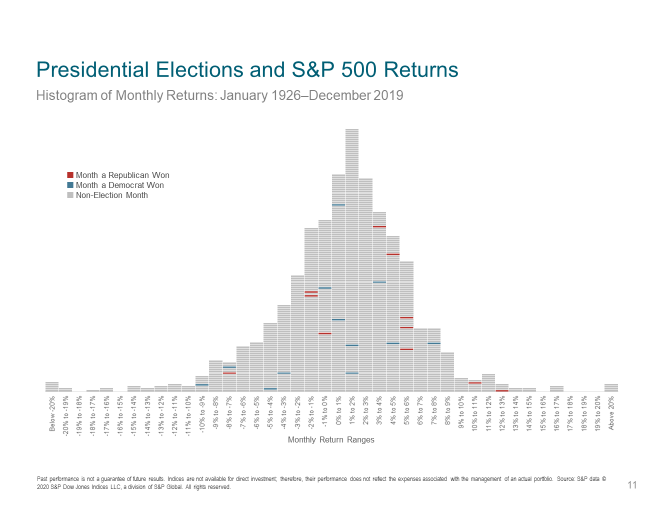 Zooming out, what about the year immediately before and after an election?  Historically, average returns have been positive: 11.3% in an election year, and 9.9% the year after. There could be many factors at play, but I think this small difference is down to random chance. This seems likely since the last 10 elections have mostly shown stronger returns in the year following the election, the opposite of the longer-term average. 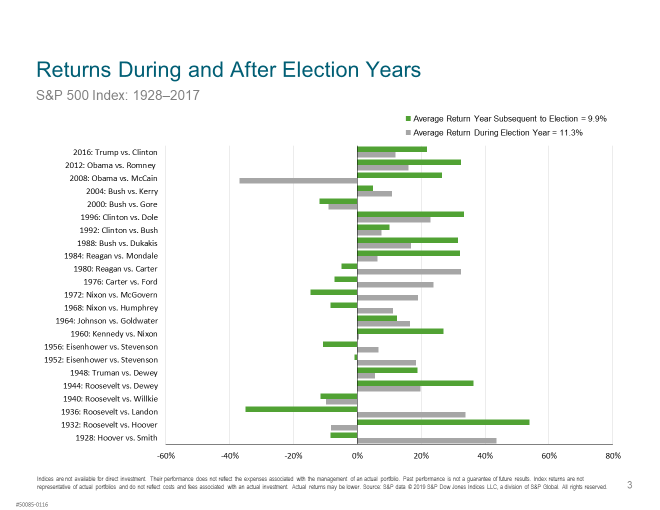 Still, with an average annual return, considering every year since 1929 of 10.3%, there seems to be no reason to fear the year following an election.

The Next Presidential Term

What about the entire term for presidents of either party? Republicans tend to be very business oriented, so the market must do better with a Republican administration, right?

Actually, no, at least not over the past 92 years. Even if we consider the Great Depression an outlier and ignore the returns for Hoover and Roosevelt, Democratic presidents still have better market performance. 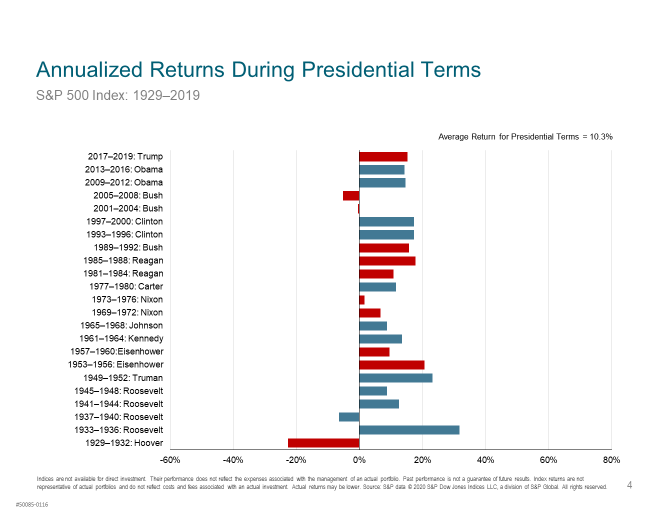 Does this mean that Democrats are better for the stock market? Maybe, but probably not. Correlation does not imply causation. This same calculation, performed 20 years ago (before the Great Recession), would have shown just the opposite result. It could just as easily be that Democrats become more appealing in times of economic recession, while people are out of work but the market is recovering.

Note that each bar in the graph (except the most recent) represents four years of returns, labeled with the name of the president at the start of the term. (Sorry, Gerald Ford, you didn’t make the cut since you did not enter the Presidency by election.)

Do presidents have an impact on the stock market? Undoubtedly, but not always right away and not in a predictable manner. No one can actually tell how a president has influenced the market and the economy until years or decades later. And even then, these conclusions are speculative. (I once wrote a piece on how Herbert Hoover, who served from 1929 to 1933, helped cause the 2008-09 Great Recession.)

What You Should Do

First, don’t make any changes to your investments due to the election. And second, on Tuesday, November 3, vote with your values, not your investment portfolio. In the long run, your wealth is likely to be fine. Yes, the President of the United States wields a lot of power. But history shows that, over time, the market is even stronger, and has a mind of its own.

Forbes, “We Looked At How The Stock Market Performed Under Every U.S. President Since Truman — And The Results Will Surprise You” (Jul. 23, 2020), https://www.forbes.com/sites/sergeiklebnikov/2020/07/23/historical-stock-market-returns-under-every-us-president/#3a88438ffaaf

You will of course find all of our advisors on NAPFA’s site too, but in case you want a longer list or didn’t find an advisor you were looking for on our site; the Find An Advisor tool by NAPFA is another resource.

Our advisors are on the XY Planning Network site as well, but in case you want a longer list or didn’t find an advisor you were looking for on our site; the Find An Advisor tool by XYPN is another resource.

Another great resource from NAPFA is their Pursuit of a Financial Advisor Field Guide. It provides a good overview of the basics you’ll want to know as you begin your search for a great advisor.

our Network of Advisors are here for you

Find the right advisor for you